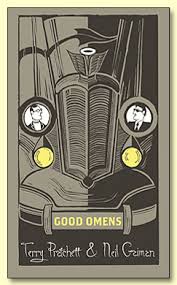 It wasn’t a dark and stormy night. It should have been, but that’s the weather for you.

There is a hint of Armageddon in the air. According to the Nice and Accurate Prophecies of Agnes Nutter, Witch (as recorded in 1655), the world will end on a Saturday. Next Saturday, in fact. So the Armies of Good and Evil are massing, the four Bikers of the Apocalypse are revving up their mighty hogs and hitting the road, and the world’s last two remaining witchfinders are getting ready to Fight the Good Fight. Atlantis is rising. Frogs are falling. Tempers are flaring, and everything appears to be going to Divine Plan.

All that’s required now is the Anti-Christ. There’s just one glitch: someone seems to have misplaced him.

I have been meaning to get into Terry Pratchett and Neil Gaiman for quite a while now, and chose this book not only because it is on the Dymocks Top 101 List but also because it was a taste of both authors.

I laughed my whole way through the novel. It was just so very very funny, mocking everything from religion to the motorway to telesales people. Its hilarity is the primary reason why I rated this book five stars – I haven’t ever read a fantasy so funny!

Crowley (an angel who did not so much fall as saunter vaguely downwards) and Aziraphale (an angel, and part-time rare book dealer) have been on earth since the beginning, Sunday the 21st of October, 4004 BC. Both have come to quite like earth, and they have become friends of a sort. Their relationship is fantastic, exactly how I want to imagine angels and demons – they acknowledge that evil isn’t pure, that the potential for good or evil lies in every human being. As well as being hysterical, these characters offered up some of the more philosophical moments.

I particularly loved this scene – see what I mean about being funny? And the whole book has segments you just want to quote everywhere! I will be rereading with post-it notes!

Aziraphale collected books. If he were totally honest with himself he would have to have admitted that his bookshop was simply somewhere to store them. He was not unusual in this. In order to maintain his cover as a typical second-hand bookseller, he used every means short of actual physical violence to prevent customers from making a purchase. Unpleasant damp smells, glowering looks, erratic opening hours – he was incredibly good at it.

While there were a few other characters with chapters to themselves – Adam, the Anti-Christ, Anathema Device, a professional descendant of the prophetess Agnes Nutter, Newton Pulsifer and a number of others, it was the chapters with Crowley and Aziraphale which was the best. I read a review where someone compared the two characters to Crowley and Castiel from the Supernatural television series (which to be honest, I only know from Tumblr), not least because Aziraphale wears a trench coat.

Another line I absolutely adored – there are just way too many good ones! – was Death telling an unlucky delivery man DON’T THINK OF IT AS DYING…THINK OF IT AS LEAVING EARLY TO AVOID THE RUSH. When Sir Terry Pratchett died in March, this one of the quotes that kept coming up again and again and I loved it – I think it is a beautiful sentiment and, while Death isn’t very nice in this particular story, I am looking forward to reading his personification of Death in the Discworld books.

I could continue quoting this book for days – there is something valuable and hysterical on almost every page! I would recommend this book to everyone who loves British comedy shows, and to everyone else who just wants a laugh. Read and enjoy – this is the kind of book which makes the world a better place.

Also, to anyone who has read Terry Pratchett or Neil Gaiman before, what are your favourite books? Which Discworld novel should I be starting with?